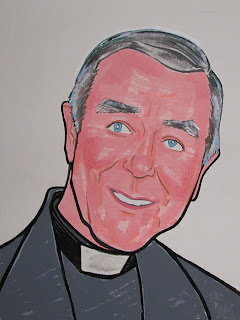 Sardi’s might seem like an strange place to celebrate the life of a Roman Catholic priest, but in the case of the Rev. Joseph A. Kelly, S.J., a man called Father Broadway by mystery novelist and friend of 40 years Mary Higgins Clark, it was most appropriate.

So yesterday, the eve of what would have been Joe’s 79th birthday, more than 200 people gathered at the famous Broadway watering hole to raise a glass and pay tribute to the priest who as parochial vicar of St. Malachy’s/The Actors’ Chapel for 15 years combined his love of God, people and the theatre. We did so while unveiling one of show business’s highest honors, his portrait that will hang in the main dining room along side those of Broadway’s greatest stars, past and present.

“This room is filled with people who loved him,” said Kathryn Fisher, a former St. Malachy’s parishioner who led the campaign to have Joe, who died a year and a half ago, immortalized at Sardi’s. “He was my best friend. I bet plenty of people here would say that.”

He certainly was a friend to me. I met Joe in 1996 when I interviewed him and then-pastor Monsignor Michael C. Crimmins for a feature on St. Malachy’s for America magazine. After hearing about the work they were doing ministering to struggling actors, I felt called to create a celebratory service that would reach out to that community across faith lines. I wrote to theatre district clergy -- Jewish and Christian -- and proposed a gathering in September to ask God’s grace on the new season. All were enthusiastic, but none so much as Joe. Within days he had talked it up so vigorously around the Broadway business world that he lined up enough money for us to put on a lovely reception afterwards.

I don’t know if I’d be preparing for our 14th annual Broadway Blessing this year without Joe’s early and continued support -- probably not -- but I’m certain we wouldn’t be having it at the Cathedral of St. John the Divine, where it is thriving and entertaining nearly 500 people each year. Few people know what a friend to me Joe was in this regard.

There was no one like Joe. He was an Irish Jesuit, and as true a representative of those two categories as ever lived. Born in Tullamore, County Offaly, Ireland, Joe had a sense of humor and love of life that radiated. As a Jesuit, he was a politician in the purest sense of the word. His rallying support for Broadway Blessing was just one example of how he could inspire people to join his vision. When St. Malachy’s was planning to celebrate its centennial in 2003, he raised $250,000 for the parish, and got the city to name the church’s block of West 49th Street “St. Malachy’s Way.”

He just had a way of drawing people to him. They responded to the way he took such an interest in them. Actor Malachy McCourt, in an address to the Sardi’s gathering, said he felt as if he had lost another brother when he lost Joe, too close to the time he lost his own brother, Frank.

“Joe had no concept of sin,” he said. “He just thought we all had some minor defects.”

He spoke about Joe’s love of the drama of biblical stories -- “Joe knew about the Bible, oddly enough for a Catholic” -- and his lightheartedness. “There’s only one letter difference between pray and play. He often confused them.”

One of Joe’s favorite theatres (and mine too) was the Irish Repertory Theatre. Joe christened the daughter of managing producer Ciaran O’Reilly eight years ago.

“I can’t wait to bring her to Sardi’s to see the portrait of the man who baptized her,” he said. “His acts of God could fill Times Square.”

Mary Higgins Clark said she loved Joe’s wit, and admired all he did to raise money for St. Malachy’s, which had been in financial trouble before he arrived. “I’m very sure Joe is here. He was a joy, a delight.”

She remembered a time when she and Joe were in a restaurant and actress Maureen O’Hara was seated nearby. Joe, who loved celebrities, debated whether he should go over to introduce himself, quickly deciding he would just say a quick hello. But Joe being Joe, he ended up pulling up a chair and chatting about Ireland -- they were from neighboring towns -- and many other things.

“He was a boy and a man,” she said. “He charmed everyone. He’s one of the reasons St. Malachy’s lasted. He brought that beautiful chapel back to life. He gave it back to us.”

She speculated as to why he was taken from us so unexpectedly 18 months ago, saying that the angels must have been feeling glum and saying to God, “Lord, you have stated you love cheerful saints, so bring him home.”

The celebration concluded with Broadway actor David Beach leading the gathering in singing Joe’s favorite song (and one of mine too!), “The Best of Times” from La Cage aux Folles:

So hold this moment fast,
And live and love
As hard as you know how.
And make this moment last
Because the best of times is now,
is now, is now.

Now, not some forgotten yesterday.
Now, tomorrow is too far away.

At the start of the evening, Kathryn explained why she wanted Joe’s portrait on Sardi’s wall. He had lamented to her that he felt he hadn’t made enough impact in life and that he would quickly be forgotten.

“I think we showed him tonight,” she said.

As long as my memory is functioning, I won’t forget you Joe, and you will always be part of the spiritual fabric of Broadway Blessing. Until we meet again, I’ll let you take care of the actors in heaven and I’ll do my best to look out for the ones down here.

You brought happy tears to my eyes! Thank you so much for sharing his story with everyone. I know that you wrote this about 7 years ago, but I just found it now. It's 2:30 am, and I can't sleep. I just finished watching a movie that made me very curious to know the history of my family. Father Joseph Kelly, known to me as Joe, was my grandmother's cousin. My family parties were always a blessing with Joe there. He was a man of God, and a boy at heart! He broke bread in our home when I was a kid on Long Island. We sang Irish songs and loved a good joke. He baptized practically all of the kids and married them off to start their own families. When I think of him I can't help but smile! The most humble of men, and a true friend. I love to hear about his life outside of our family, and how he had that way of making everyone feel important and valued. It's funny, but I remember always thinking that Joe would be on the alter when I got married one day. He told us all once that he was retiring from doing the weddings and baptisms. I honestly think he just wanted to be with us to enjoy the moment. He gave the best homilies at mass! I don't know anyone that could grab your heart and attention like he did. I wasn't able to be there for his funeral. In a way, I feel like he'll always stay young and alive through the stories that we share of him. God gave us an angel. I know when I go to heaven someday, he will be there with my family to welcome me home.