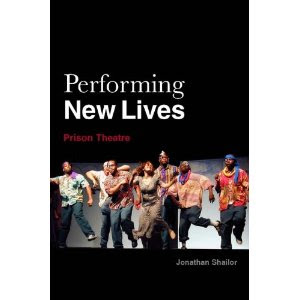 Brent Buell sent me an e-mail recently to tell me that a chapter of his is included in a new book about prison theater: Performing New Lives by Jonathan Shailor, published by the Jessica Kingsley Press in England.

Brent’s chapter, "Drama in the Big House," chronicles the 10 years he volunteered with Rehabilitation Through the Arts at Sing Sing, teaching acting and directing shows--a process that in its pure form changes lives.

Congratulations to him for this, as well as the honor of having the editors selected one of his photographs from his play Breakin' the Mummy's Code as the cover of the book.

Some background about this talented and giving man: Brent’s direction has been described as both startling and visionary.  His directorial work includes From Sing Sing to Broadway, which premiered at Playwright’s Horizon on 42nd Street. Goddess Films tapped him to direct “Moses,” a short comedy written by and starring Rosie DeSanctis premiering later this fall.

For the last 10 years, Brent has volunteered with Rehabilitation Through the Arts, directing theater in New York’s maximum-security prisons. There his productions of plays like John Steinbeck’s Of Mice and Men have earned praise from critics, including from The New York Times.  His Breakin’ the Mummy’s Code, premiered at Sing Sing and was the subject of a feature article in Esquire by best-selling author, John Richardson.

As an actor, Brent has appeared in classic roles from Shakespeare and Ibsen to Moliere and Strindberg, and on the big screen in both the hit comedy "Grand Opening" and the soon to be released controversial thriller "Al Qarem."  He also has formed his own production company, Doing Life Productions, and is currently directing and co-producing the New York production of Iyaba Ibo Mandingo’s Self Portrait with Tony Award-winning executive producer, Jane Dubin.
Posted by Retta Blaney at 5:11 PM