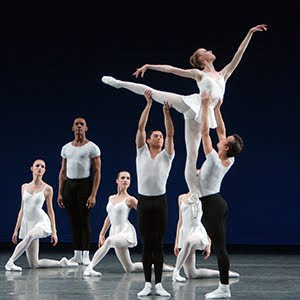 In ballet, there are many lands. For example, there is Ballet Fairy Kingdom, with its swans and spinning wheels and Wilis. And there’s Ballet Story Village, where you’ll find fun, misunderstood romance, and a strange person wandering through who ends up solving all the problems. In the world of choreographer George Balanchine, you can find Black and White Land, where dancers wear rehearsal clothes, as well as his Blue Sky Kingdom, set in the clouds, a taste of the heavens. Three of these lands were in evidence with an early October program at the New York City Ballet.

Balanchine’s Blue Sky Kingdom is almost literally heaven, with Chaconne being perhaps the most heavenly of all. Because the music is from Gluck’s Orfeo and Euridice, one must be alert to the Orpheus theme, so important in Balanchine’s repertory, and here, Orpheus is always with his Euridice. In the first glorious pas de deux, so dreamlike and magical, man and woman (Whelen and Marcovici here) scarcely look at the other even as they embrace, turn, touch, and reveal the sensual and yet heavenly love each has for the other. No unhappy endings here, no one’s torn apart – it all concludes in a regal brilliant celebration.

Chaconne is so lovely that it really does not require much more than dancing. I enjoyed listening and watching as one dance phrase would follow the violins and the next an oboe. Stephanie Zungre led a nifty pas de cinq, Marcovici proved a strong partner and a daring, moving dancer. Whelan, however, was too provocative, often breaking the spell with too much in the way of hip shifts or an unmistakable come-on look, which made me cringe. Chaconne doesn’t want that; Chaconne is all in the steps and the dancer’s movement, and the music can’t take that much push. That’s not to say that individuality isn’t vital; it is. But it is the dancer’s own individuality that matters, and that is part of her body and part of her soul. Nothing needs to be added.  Whelan’s earthly dancer affected the balance of the partnership as Marcovici was all present, just as he was, and beautiful. He attended her and loved her but was he didn’t have to be on the make.  This Euridice wasn’t worth going after. She wanted to stay down below.

In the quirky pair of Monumentum Pro Gesualdo/Movements for Piano and Orchestra, Balanchine and his friend Stravinsky first bring us courtly grandeur in black and white. Because in court dance, leg movements are minimal, it mostly relies on arm movements, and Balanchine’s first few moments give us startling and witty ones. The wit continues throughout in particular moments, such as when a row of ballerinas arabesque and flex their feet. Balanchine was having fun; I suspect Gesualdo was, too.  I wanted to laugh all the way through Movements, with its quirky “what’d you say again” music, but I pretended to be properly solemn with the rest of the audience. Conductor Clotilde Otranto seemed to get the joke; she bounced all the way through her conducting, and I don’t think it was just so this tiny woman could see the musicians in the rear. By the way, one effect of the reconstruction of the former New York State Theater is a sense that you’re inside the orchestra. It’s marvelous.

This second time I saw the Tchaikovsky Pas de Deux, it was still being danced a tad too cautiously.  I enjoyed the lush musical beginning, and the dancers (Ashley Bouder and Joaquin de Luz) were plucky, certainly, but fish dives do imply a dive. She just pretty much carefully lay down, and, after a very long pause, he steered her toward the floor. Well, yes, that’s what should happen, but it looked as if they were just learning it. When you watch, um, Patricia McBride and Mikhail Baryshnikov bring this one on, even on DVD, well, never mind. The audience around me gasped.  They were happy.  So, okay.

Let’s roll back the tape (can we still use that metaphor?) and return to those thrilling days of yesteryear when we believed in the promise of Peter Martins’ choreography, perhaps because we kept applauding. Well, there was a reason. As I mentioned with the Barber Violin Concerto, Martins’ earlier work seemed more open, engaging, and optimistic, less of a classroom exercise. Same here. His Balanchine-requested-work, The Magic Flute, is a lovely piece that Martins set for a School of American Ballet Workshop back in 1981 and brought to the NYCB stage in 1982. It’s not the Mozart music or story; the music is by Riccardo Drigo, but there's a flute and a lot of silly misunderstandings and young lovers with obstacles. For some reason, it’s been out of the repertory for ages.  I remember laughing my head off when I saw it both at SAB and at the NYCB staging (with a young Darci Kistler and Jock Soto). Now, I just smiled. It wasn’t that it seemed trite; it seemed to need a push. It is loaded with so many jokes, but the cast seemed not to be aware of any punch lines to punch up.

It’s true that Martins has a knack for story ballets. His La Sylphide, Swan Lake, and Sleeping Beauty are well done works (and that’s all they are, wishful thinking to the contrary), and The Magic Flute is a sunny addition (his Swan Lake and Sleeping Beauty never seem to see the sun), and it is amusing, not taking itself too seriously, which is its chief virtue, that and some excellent dancing.  Martins put his tongue in his cheek and used all those stock characters of Ballet Story Village – peasants, civil authorities, soldiers, and that mysterious magical stranger. What wasn’t in the performance was a ton of personality – more than just the steps. Still, it’s nice to see the kids from the school, and they seemed to be having the fun the piece needed. But it needs a little more push and a little more punch from the adult cast. (Wendy! Over here!) And, you know, I still believe, and I’ll still keep clapping.


Performances of George Balanchine’s The Nutcracker at the New York City Ballet begin Nov. 26 and run through Jan. 2, at the Davis H. Koch Theater at Lincoln Center, followed by a full repertory season from Jan. 18 through Feb. 27. For tickets and information, go to www.nycballet.com.

Writer/singer Mary Sheeran’s new novel, Quest of the Sleeping Princess, which unfolds during a gala performance of the New York City Ballet, will be published later this month. She has sung through several operas, cabarets, and song recitals in New York, including several performances of Songs From the Balanchine Repertory. Her novel, Who Have the Power, an exploration of cultural conflict, feminism, and Native American history set on the American frontier, was published in 2006 (www.whohavethepower.com).
Posted by Retta Blaney at 10:08 AM